COVID-19 and Public Actions for the Urban Poor

This think piece was co-authored with Dr. Shahidur Rashid, Director for South Asia, IFPRI. The article was also published on Financial Express. 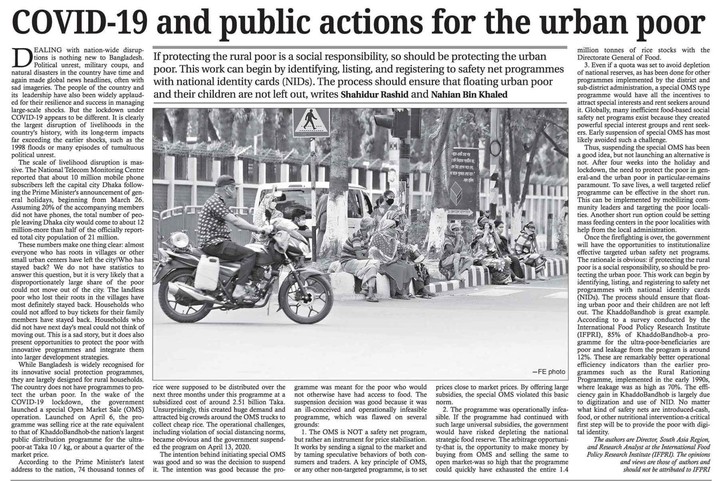 Dealing with nation-wide disruptions is nothing new to Bangladesh. Political unrest, military coups, and natural disasters in the country have time and again made global news headlines, often with sad imageries. The people of the country and its leadership have also been widely applauded for their resilience and success in managing large-scale shocks. But the lockdown under COVID-19 appears to be different. It is clearly the largest disruption of livelihoods in the country’s history, with its long-term impacts far exceeding the earlier shocks, such as the 1998 floods or many episodes of tumultuous political unrest. The scale of livelihood disruption is massive. The National Telecom Monitoring Centre reported that about 10 million mobile phone subscribers left the capital city Dhaka following the Prime Minister’s announcement of general holidays, beginning from March 26. Assuming 20 per cent of the accompanying members did not have phones, the total number of people leaving Dhaka city would come to about 12 million-more than half of the officially reported total city population of 21 million.

These numbers make one thing clear: almost everyone who has roots in villages or other small urban centers have left the city! Who has stayed back? We do not have statistics to answer this question, but it is very likely that a disproportionately large share of the poor could not move out of the city. The landless poor who lost their roots in the villages have most definitely stayed back. Households who could not afford to buy tickets for their family members have stayed back. Households who did not have next day’s meal could not think of moving out. This is a sad story, but it does also present opportunities to protect the poor with innovative programmes and integrate them into larger development strategies.

While Bangladesh is widely recognised for its innovative social protection programmes, they are largely designed for rural households. The country does not have programmes to protect the urban poor. In the wake of the COVID-19 lockdown, the government launched a special Open Market Sale (OMS) operation. Launched on April 6, the programme was selling rice at the rate equivalent to that of KhaddoBandhob-the nation’s largest public distribution programme for the ultra-poor-at Taka 10 / kg, or about a quarter of the market price.

According to the Prime Minister’s latest address to the nation, 74 thousand tonnes of rice were supposed to be distributed over the next three months under this programme at a subsidized cost of around 2.51 billion Taka. Unsurprisingly, this created huge demand and attracted big crowds around the OMS trucks to collect cheap rice. The operational challenges, including violation of social distancing norms, became obvious and the government suspended the program on April 13, 2020.

The OMS is NOT a safety net program, but rather an instrument for price stabilisation. It works by sending a signal to the market and by taming speculative behaviors of both consumers and traders. A key principle of OMS, or any other non-targeted programme, is to set prices close to market prices. By offering large subsidies, the special OMS violated this basic norm.

The programme was operationally infeasible. If the programme had continued with such large universal subsidies, the government would have risked depleting the national strategic food reserve. The arbitrage opportunity-that is, the opportunity to make money by buying from OMS and selling the same to open market-was so high that the programme could quickly have exhausted the entire 1.4 million tonnes of rice stocks with the Directorate General of Food.

Even if a quota was set to avoid depletion of national reserves, as has been done for other programmes implemented by the district and sub-district administration, a special OMS type programme would have all the incentives to attract special interests and rent seekers around it. Globally, many inefficient food-based social safety net programs exist because they created powerful special interest groups and rent seekers. Early suspension of special OMS has most likely avoided such a challenge.

Thus, suspending the special OMS has been a good idea, but not launching an alternative is not. After four weeks into the holiday and lockdown, the need to protect the poor in general-and the urban poor in particular-remains paramount. To save lives, a well targeted relief programme can be effective in the short run. This can be implemented by mobilizing community leaders and targeting the poor localities. Another short run option could be setting mass feeding centers in the poor localities with help from the local administration.

Once the firefighting is over, the government will have the opportunities to institutionalize effective targeted urban safety net programs. The rationale is obvious: if protecting the rural poor is a social responsibility, so should be protecting the urban poor. This work can begin by identifying, listing, and registering to safety net programmes with national identity cards (NIDs). The process should ensure that floating urban poor and their children are not left out. The Khaddo Bandhob is great example. According to a survey conducted by the International Food Policy Research Institute (IFPRI), 85 per cent of Khaddo Bandhob-a programme for the ultra-poor-beneficiaries are poor and leakage from the program is around 12 per cent. These are remarkably better operational efficiency indicators than the earlier programmes such as the Rural Rationing Programme, implemented in the early 1990s, where leakage was as high as 70 per cent. The efficiency gain in Khaddo Bandhob is largely due to digitization and use of NID. No matter what kind of safety nets are introduced–cash, food, or other nutritional intervention–a critical first step will be to provide the poor with digital identity.